I'm posting from a Warnet in Manado, at the northern tip of Sulawesi. I spent nearly a week on nearby Bunaken Island, but managed only eight dives as a result of a cluster of illnesses. This afternoon I am catching a bus to Bitung and a boat to Lembeh, with the intention of spending a couple more days diving. The rainy season has begun in earnest.

I dived with Living Colours, an outfit run by a Finn called Jaakko, one of a tiny minority of the 40 or so operators in the Bunaken National Park that actually takes steps to clean up and preserve the reef. The resort consists of wood and bamboo bungalows with a lot of nice touches: solid coconut wood beds, insect sprays and repellents of various kinds, hot water, hammocks. This is the view from the verandah. 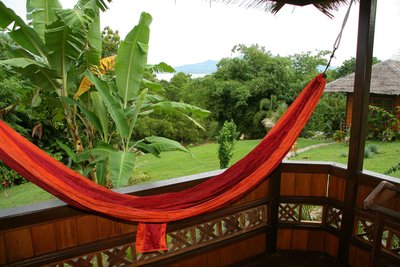 And this is a view towards my cabin. 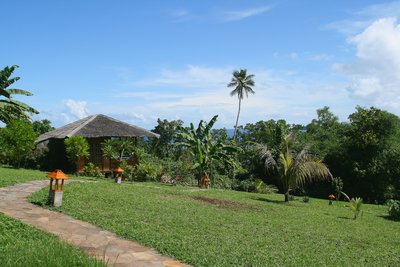 Unfortunately they were full after two nights, so I went down the path to Lorenso's, a more basic place. The wildlife in my room was undesirably spellbinding. But the social life was better at Lorenso's because we all sat around the same table to eat our fish, rice and vegetables. It was pleasantly polyglot: French, Italian, Czech, Finnish and German were heard, as well as the inevitable lingua franca. And many of the guests were very interesting people, including a former Catholic priest called Artur, who got married thirty years ago and had to find a new job (running a liturgical institute); Miguel, a permanent traveller from Spain; Fabiano and Ludovica, from Ostia but living in Holland; Deepal, a kiwi who runs an NGO treating PTSD victims in earthquake zones in Java. And Pierre and Valerie, a couple from Francophone Switzerland who are travelling for three years with their seven-year-old twin daughters. They teach them maths and French in the mornings; apparently that is the entire curriculum for pupils of their age in their home canton.

If you were to produce an economic balance sheet of the resorts in the region, some of the assets would be land and buildings; some would be goodwill [not in an economic balance sheet, come to think of it]; but a large part would be accounted for by ownership interests in the reef. Unfortunately, of course, the reef is held in common, the health of the reef is a common good and the fish taken from it are a private benefit. Nevertheless the numbers of operators are small enough that you would expect them to be able to cooperate to manage their common asset. Some of them do; but most of them apparently fail even to perceive their private commercial interest in preserving the reef that brings the tourists.

Other than the plastic bags that drift across from Manado, though, the reef remains very healthy. The dives are wall dives. The walls disappear into invisible depths; apparently the sea is 2 km deep at its deepest around here. On every dive you find yourself in apparently infinite schools of red-tooth triggerfish and schooling pyramid butterflyfish. The hard and soft corals, hydroids, tunicates and especially the sponges abound. There are one or two green turtles; the odd black-tip reef shark (not common, though); some big-eye barracuda; a great barracuda or two; schools of Teira batfish; pairs of fire dartfish; scrawled filefish; the biggest giant clams I have ever seen; some big trevally of various kinds; scorpionfish including leaf scorpionfish of various colours; lionfish; pufferfish large and small; spotted boxfish; huge trumpetfish; the most aggressive anemonefish ever (they headbutt you, going for the eyes), plenty of Chromodoris, Phyllidia, Nembrotha and Aeolid nudibranchs; Napoleon wrasse; striped eel catfish; different kinds of tiny Periclimenes shrimp; some big petticoated bivalves, perhaps abalone; snapper in large quantities, mainly black; banded sea-snakes; moray eels of various kinds; and at least one black and yellow ribbon eel.

The plan thereafter was to to a circle back to Makassar via Ternate and Ambon, However, I have received wildly conflicting information about the trip from Ternate to Ambon (no or some planes; some or more boats) and I don't have enough time left on the visa to take the risk, so I am reluctantly giving up on the idea of Ternate and going to Ambon instead, via Makassar.

Probably as a result of the various illnesses, I feel tired of travelling just now. I am sick of all the attention, of the 'hello misters' every ten seconds as you walk down the street, of the cold water and the cockroaches. I cannot summon much enthusiasm for the trip to the possibly idyllic island of Banda, and none at all for the planned visit to Cambodia later in the year. I hope this passes; meanwhile I am looking forward to having cheese and wine five times a day in Singapore next month.

The incumbent, universally known as SBY, has finally announced his candidacy. Former President Megawati Soekarnoputri, of the PDI-P, is standing too, and so, perhaps, is former President Wahid. More interestingly, Sultan Hamengkubowono X of Yogyakarta is also seeking his party's nomination. He will have to win the nomination of the Golkar party ahead of SBY.

Hamengkubuwono X is the hereditary sultan of Yogyakarta, which is a province in itself. He lives in the kraton in the middle of the city. And every day he commutes to another palace, because he is the democratically elected governor of the province. It seems that Jakarta tried to take power away from the sultanate by giving powers to a governor, but everyone voted for him anyway.

Posted by Wardsan 13:27 Archived in Indonesia