It’s Remembrance Sunday. It’s also my birthday, and I think this is the hundredth post on this blog. It has been a better year than most, but then I have spent nine months of it abroad. This morning I pottered about eating Pringles and listening to saved-up BBC Radio 4 podcasts: Law In Action, In Our Time, Material World, Thinking Allowed. After a quick trip to Fort Rotterdam, where I was again the tourist attraction (photographs and interviews granted), and an excellent sashimi lunch, it started raining hard and I came to the mall to surf. Quantum of Solace is on at the cinema here – but only in Indonesian, chiz. I have some bread and babybel and Lindeman’s red wine to consume this evening as a treat.

Here is a cheese on toast frog at Fort Rotterdam. 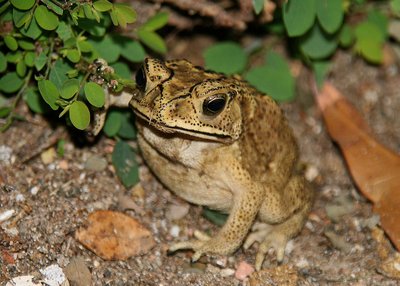 I have mentioned Alfred Russel Wallace a few times and I shall mention him again. I read most of The Malay Archipelago, by Wallace, in a nice edition from Periplus. I looked for it for months before finding it in Bali, and read it at slowly as I could bear. I lost it, though, a few days ago, so all comments have to be from memory.

From 1854 Wallace spent eight years travelling around what are now Malaysia and Indonesia, and in that time he formulated a theory of evolution by variation and natural selection. In fact he did so in the northern Moluccas, while prostrate with malaria. In 1858 he wrote to Charles Darwin from Ternate about his conclusions. Darwin had independently come to the same conclusions twenty years before, but had not published his findings, fearing the reaction. Both had been inspired by reading the Essay on Population by Thomas Malthus (first published in 1798). The point of the essay that stimulated both was hyperbundance: the tendency of species to produce more young than can surive given the resources available, and the consequent competition between members of the same species.

James Hooker and Charles Lyell, who knew of Darwin's earlier work, arranged that Darwin and Wallace should publish papers in the same edition of the Transactions of the Linnaean Society, and both papers were read out at the same meeting of the Society.

There was no competition between the two; each man admired the other. Wallace dedicated The Malay Archipelago to Darwin, and throughout his long life modestly referred to the theory of evolution by natural selection as ‘Darwinism’. [Darwin wrote to Wallace a decade after the Linnaean Society meeting: "I hope it is a satisfaction to you to reflect... that we have never felt any jealousy toward the other, though in one sense rivals."]

They came from different backgrounds: Darwin the son of a vicar, of independent means; Wallace an autodidact from Monmouthshire who had to pay his way. Wallace financed his travels by collecting animals and selling them to private collectors (including Darwin) and to museums. From his Asian trip he brought back 125,000 animal specimens, of which half were the beetles that obsessed him. Many were new species – at least 900 Longicorn beetles alone. In his twenties he had travelled for four years in the Amazon, but he brought back nothing from that trip: as he travelled home his ship caught fire and he was shipwrecked, losing everything.

In the book, which is a journal rather than a learned paper, he comes across as a thoroughly engaging figure – fiercely intelligent, kind and possessed of boundless curiosity and stamina. He travelled to places that no European had visited. He did have quinine and a mosquito net, but was nevertheless often very ill for weeks in the middle of nowhere. When he got ill he was on his own; it must have taken great courage to continue to travel in the face of such a high probability of expiry. The book records his travels, with a strong bent towards geography, geology, ethnography and ecology. You do want to be interested in animals, but it is a great pleasure to read, and all the more so while travelling around the same region.

I described the Wallace Line in a previously post as a climatic line running from north to south. Wallace indeed noted that the climate becomes drier from the eastern third of Java onwards, and attributed this to the influence of the Australian continent. But his line is much cleverer than that. It is a geological hypothesis based on the modern distribution of animal species and genera.

Wallace observed that, ignoring the most far-ranging birds (whose origin cannot be surmised), species of Asian origin become progressively less common as you go east. Conversely, birds of Australasian type, such as cockatoos and parrots, become more common, and appear first in Lombok. In general, birds and butterflies become sparser as you go east.

Furthermore, most of the species of Asian origin are also found on the Asian mainland; only a minority of species east of Bali are not also found in Thailand or India. For the birds of Australasian origin, however, only the genera are common to both places; within each genus, the species tend to be unique.

Wallace also found that there were almost no Asian or Australasian mammalia in the islands east of Bali. He assumed that those that are found, such cats, dogs and deer, and possibly horses, water buffalo and pigs, had been introduced by humans (dogs and pigs were probably introduced during the Austronesian expansion, 3,500 years ago).

He also noted that, while the seas are relatively shallow around the islands, there are deep channels between Bali and Lombok and between Australia and Timor. The 100 fathom line encompasses Borneo, Java, Bali, Sumatra and Asia on the one hand, and Australia, New Guinea and Timor on the other. (He was not sure about Sulawesi.) If the sea fell 100 fathoms, there would still be a gap of twenty miles between Timor and Australia.

Hence he concluded that Sumatra, Borneo, Java and Bali had once formed part of the Asian mainland. But the islands between Lombok and Timor were truly oceanic, having been attached to Australia, if at all, only in the very distant past. Animals from Australia had got there first, crossing the twenty mile gap to Timor, and had had time to evolve into new species. Those from Asia had arrived more recently and had not had time to evolve much.

[Post script. Darwin was not the son of a vicar. His father, Robert, was a physician; and his father, Erasmus, was also a physician. Erasmus also believed that species were not immutable, and published his argument in verse. Darwin was initially supposed to be a physician, and trained for a year at Edinburgh. But he did not get on with it - he did not like blood, for one thing - and he quit after a year and a half. He did learn taxidermy, though, from a freed Guyanese slave, which later proved very useful. Eventually he and his father agreed that he should go to Cambridge University, with the intention of becoming a vicar (as the majority of Cambridge graduates still did). No entrance exams in those days: his father simply arranged for him to go up to Christ's College. When he set off on his voyage on The Beagle he still intended to enter holy orders on his return. For that and other reasons, Robert initially vetoed Charles's journey. It took Charles's maternal uncle, Josiah Wedgwood, to argue him round.

Darwin spent most of his time at Cambridge collecting beetles, hunting, and going on walks with J S Henslow, the professor of botany. He was very modest about his academic achivements at school and university. But he knuckled down to work hard in the last few months, and, despite his later modesty about his academic achievements, he came tenth out of 178. (He was examined in Classics, moral philosophy, maths, physics and astronomy.) In fact his result was much like that of John Maynard Keynes, who was equally uninterested in what he was supposed to be studying, but still managed to get a reasonable First.]

Posted by Wardsan 17:32 Archived in Indonesia