I have taken an absurd number of photos of roofs (rooves? Tolkien says dwarves, I recall [but that's because he was an expert in Old English, and the f in words like hlaf (loaf) was unvoiced in the singular and voiced in the plural; hence our modern confusion) in Bangkok. It is the shape of the roofs that makes traditional Thai buildings distinctive. Your average ubosot/bot is wooden, has a rectangular or subtly boat-shaped plan, a tiled Swiss-pitched roof (or overlapping roofs, like the armour of an armadillo or a Roman legionary) and thick square columns.

As an example, take the Buddhaisawan Chapel in the grounds of the National Museum, which holds the second-holiest Buddha in the kingdom: 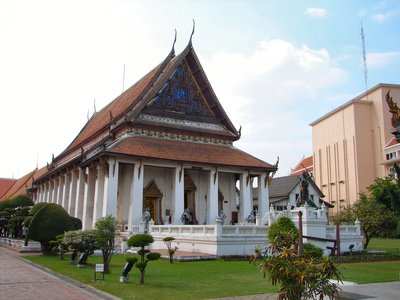 What strikes the eye is the adornment to the the roofs at the corners of the gables and the eaves. At the end of each roof is a cho fa (sky tassel) finial. These look like stylised birds, and so they may be: eg Garudas, guardian bird spirits in Thailand (originally singular, and the mount of Vishnu). Often the bird could be interpreted to be grasping a naga (chief serpent demon type, traditional enemy of Garuda, again borrowed from India via Cambodia), whose tail appears as a finial lower down. But the same shape also sometimes appears as a finial without a snake attached. And the meaning of the shapes is a mystery. There is a style called swan's tail, which apparently adorns boats and barges: not being a devotee of poultry arse, I don't know what it looks like. So the taxonomy is incomplete: further research is needed. My next stamp collecting-exercise.

In any case, it is the finials - which the Thais sensibly copied from the Khmer Cambodians - that add elegance, curvature and lightness to the edifices. So here are some photos.

In the National Museum: 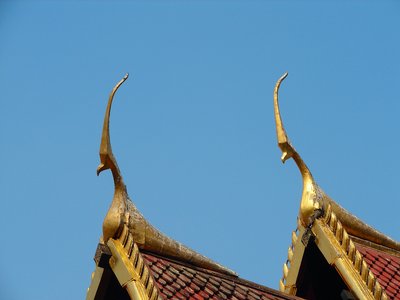 In Wat Phra Kaeow, the royal wat that is home to the Emerald Buddha: 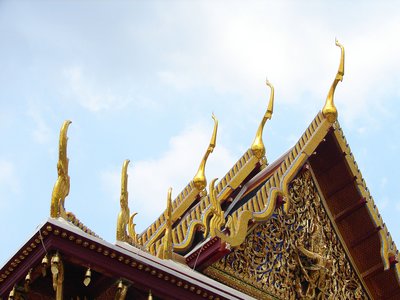 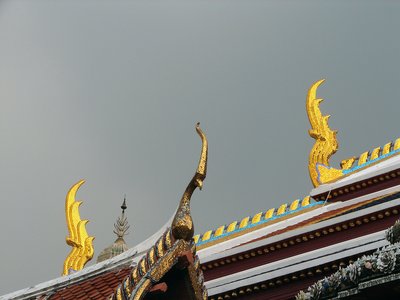 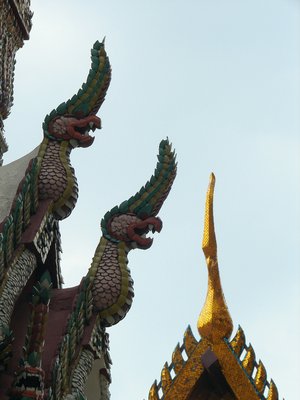 Posted by Wardsan 12:28 Archived in Thailand